In recent years, many companies have invested in emerging markets in order to take advantage of higher economic growth rates in these countries. At the May 2014 ACT Conference in Glasgow the audience were polled on a number of emerging currency issues. The poll demonstrated that 76% of the audience identified higher growth rates as a driving factor for their strategic emerging market initiative.1

While the opportunities can be attractive, companies expanding into emerging markets also face a number of obstacles, including regulatory, tax, political and cultural considerations (identified as a key risk factor by 81% of the respondents) as well as time zone and cultural differences. Managing foreign exchange risk represents another key challenge.

Relatively low volatility in emerging market currencies can often mean that many companies do not hedge their exposures at all, or hedge only on a short-term basis. The higher volatility seen across a number of currencies in H2 2013, including the Indian rupee, Mexican peso and Brazilian real, prompted significantly more companies to focus on this topic. Consequently, it has become a more prevalent concern for any company exploring these markets, alongside such core considerations as cash flow forecasting/visibility and liquidity.

In order to manage their emerging market currency exposures as effectively as possible, companies may wish to consider the following:

Differentiating between buyers’ and sellers’ exposures

FX Forward prices predominantly reflect the difference in interest rate environments of both currencies. The market typically implies that the value of the emerging market currency will be less in a year’s time than it is today. Consequently, risk management should be approached differently depending upon whether the company is a net buyer or a net seller in a particular currency.

Buyers are looking to manage the risk associated with their costs. By hedging costs which are denominated in an emerging market currency, they can effectively lock in the implied future weakness of that currency – a weakness that may not actually materialise. In such cases, the company may consider hedging as much as possible, in order to remove volatility from their costs and to create value by locking in the implied weakness.

For sellers, the picture is less clear cut as they are looking to manage the risk arising from their revenues and assets, rather than their costs. If a company does not hedge, it risks incurring losses as a result of volatility. If it does hedge, it locks in the implied future weakness of the currency – thereby eroding the value of the company’s revenues or assets.

Another consideration is that when hedging an asset, companies tend to experience a cumulative impact over time: the economic cost of hedging an asset over the course of 10 to 15 years could be as much as the total value of the asset itself (see the economic cost of hedging chart). When hedging a cash flow, companies tend to settle every year so this compounding issue does not arise. Assets and revenues should therefore be approached differently when devising a risk management strategy. 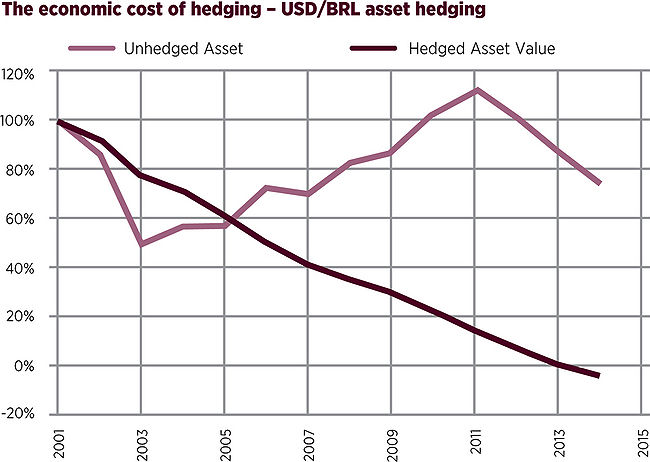 Understand that not all emerging market currencies are alike

A number of currencies are pegged or managed to the US dollar, such as Emirati dirham, or to a basket of currencies, such as Chinese renminbi. These currencies behave very differently from free floating ones. For these types of exposure a solid understanding of the country risks is very important. In particular, a risk assessment should take place to understand the impact of the currency becoming unpegged or unmanaged.

The second group contains currency pairs which have high interest rate differentials, such as US dollar/Russian ruble, US dollar/Brazilian real and US dollar/Indian rupee. For sellers of the currency, these are very expensive to hedge.

The third group consists of currency pairs which have low volatility and are not expensive to hedge, such as the US dollar/Polish zloty and US dollar/Thai baht. When dealing with these three groups of currencies, the risk management approach needs to reflect the differences. Where the expensive and volatile currencies are concerned, best practice is to exercise a systematic approach and distinguish between cost exposures and revenue/asset exposures as outlined above.

Companies should understand what it will cost to hedge their exposures and how much risk they will be able to remove by managing them. A company can then make a decision about which currencies to hedge by comparing the risk reduction/cost of hedging ratios for relevant currencies. This process is called ‘currency prioritisation’.

All are practical solutions deployable in isolation or in combination – it is important to recognise that effective risk management may incur a cost, and that a blanket hedging policy can affect the value of a strategic initiative.

Before implementing a strategy, a company needs to consider the tenor and the nature of the chosen hedge. Hedging an exposure three months forward is fundamentally different from hedging an exposure out to one year. Longer term instruments can reduce volatility more efficiently, but they do have some drawbacks: such instruments are usually more expensive and also could have higher mark-to-market volatility, meaning that the potential impact on the profit and loss could be greater. On the other hand, shorter term risk management strategies may also present some drawbacks. In some illiquid currency pairs, the cost of executing 12 individual one-month hedges may be higher than putting in place a single 12-month hedge due to the execution/roll charges for each transaction.

The hedging solutions available for managing emerging market currency risk include forwards as well as option-based instruments which can be used to achieve ‘at the money’ and/or tail risk protection. Other strategies include proxy, basket and natural hedging, but while these do have some benefits they can be less favourable from an accounting point of view and may not provide an efficient hedge. Currency prioritisation (whereby risk management is undertaken selectively based on the company’s key risk exposures and relative hedging costs) may be more effective. 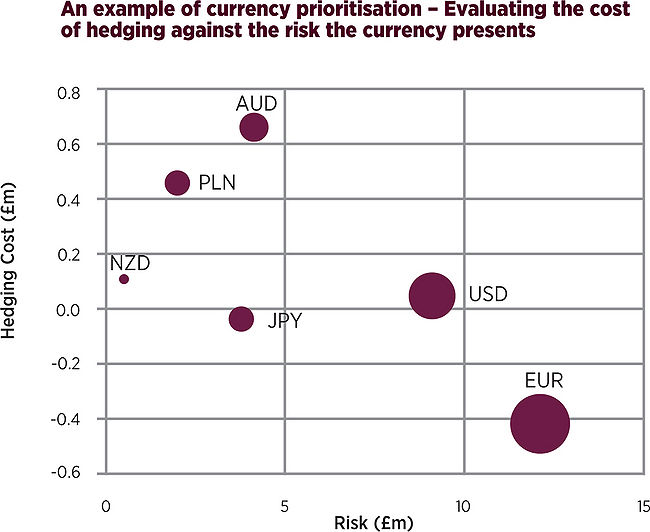 There is no one right approach when it comes to hedging strategies – but flexibility and responsiveness can be key. ACT poll respondents appeared to acknowledge this, with 39% reporting that they would analyse/prioritise FX risks and adjust hedges for diversification and cost efficiency. Few (6%) said they would choose not to hedge FX; instead reserving a percentage of profits against future emerging markets FX impact.5

It is worth noting that preparation for EM event risk should also consider ‘counterparty liquidity’ as well as ‘risk management policy’. To have to address either at a time of EM crisis could significantly impact the effectiveness of a business. Whilst EM expertise is often sought, the same expertise could very likely be exponentially exposed to the same risk event; having an alternate counterpart less exposed but also familiar with the business’s EM requirements is a prudent position. Adding a pre-defined risk management policy with a remit across a range of product solutions is also planning for the unexpected impact of any event risk. Not hedging at all is inadvisable; one big failure could wipe out all memory of previous success, and in the emerging markets arena the next surprise is often just around the corner.

Recent volatility has prompted more companies to look at managing their emerging market currency exposures – but in doing so they may incur significant costs. A systematic and informed approach is required to make sure that the benefits of a risk management programme outweigh the costs.