The journey to date

Financial reforms require a strategic and careful sequencing of policy. To complement the financial reforms, China will also need to strengthen its risk management skills, update its regulatory capacity and adopt a consistent monetary policy framework.

In order for the RMB to be a true global currency, it needs to become a currency of choice for deposits, trade, investments and central bank reserves. Its internationalisation journey began in 2004 when Hong Kong residents were allowed to hold RMB deposits in their Hong Kong bank accounts. Five years later, Chinese merchants were allowed to settle their cross-border trade with their foreign trading partners in RMB. Since then, the RMB has accelerated its international journey and has received a warm welcome onto the global financial stage.

From a currency that was not widely circulated in the offshore market five years ago, the RMB today accounts for one quarter of China’s cross-border trade settlements, with the daily average turnover of RMB real-time gross settlements close to RMB800 billion. This progress has led to the RMB ranking among the world’s top five payment currencies and top two documentary credit currencies for trade, according to financial messaging services provider SWIFT.

In 2014, a number of major developments shifted the RMB’s international journey to the fast lane. These changes included the appearance of numerous RMB clearing banks and hubs outside of Asia, the establishment of pilot free-trade zones to test financial market deregulation and the rollout of several reforms across China.

As China accelerates the liberalisation of its capital markets, both onshore and offshore RMB transactions will rise sharply. The currency is now appearing in the investment portfolios of global central banks and sovereign wealth funds, which is a key step towards the RMB becoming a reserve currency in global markets. Undoubtedly, there will be volatility on the journey but all signs point to the inexorable ascent of the RMB, with 2015 shaping up to be another critical year in the currency’s rise to prominence on the world stage.

Looking ahead, the offshore RMB market will continue to prosper. Some institutional developments in 2014 were ground breaking and have laid a solid foundation for the Chinese currency to play a greater role internationally.

Global flows of RMB will rise on capital account liberalisation

China will continue to liberalise its capital account and allow freer flows of cross-border funds. Alongside increasing the quotas for QFII, QDII, RQFII and RQDII, RMB can also be used to settle cross-border portfolio flows. The successful launch of the Shanghai-Hong Kong Stock Connect in November 2014 is profound, as onshore investors can use their RMB to invest in Hong Kong’s listed companies. Vice versa, offshore investors can raise RMB to support their onshore securities exposure. To complement the Shanghai programme the Shenzhen-Hong Kong Stock Connect is also expected to launch later in 2015 and provide even more access to China’s financial markets.

We also expect further liberalisation of capital controls in the near future, which may allow individual Mainland Chinese investors increased access to offshore investments under capital account without the need to use the existing QDII and RQDII framework which can only be accessed by institutional investors. This reform is likely to be piloted in the China (Shanghai) Pilot Free Trade Zone (SFTZ) as a starting point under a new Qualified Domestic Individual Investor (QDII2) scheme.

The SFTZ cash pooling scheme is an exciting development. Foreign investors and multinational corporations have long struggled to repatriate their funds from the onshore market. China’s regulators now allow companies to move funds overseas in the form of an inter-company loan. With the establishment of Free Trade Units (FTU) in Shanghai’s banking system in 2014, this process will become easier. Furthermore, inflows and outflows of funds sitting in FTU accounts with the rest of the world no longer require specific approval by the State Administration of Foreign Exchange (SAFE). A virtual offshore RMB market is now established within mainland China. As the free trade zone initiative is now extending to Guangdong, Fujian and Tianjin, the volume of such flows is likely to increase dramatically.

For RMB settlements, China has historically relied on its domestically focussed China National Advanced Payments System (CNAPS). However, as the RMB is increasingly being used outside of China’s borders, the CNAPS system has surpassed the boundaries of its intended user base and a new international settlement system, in the form of CIPS, has been in the works for several years to accommodate the globalisation of the Chinese currency. Originally slated for launch in 2014, CIPS is expected to be operational in late 2015 and will provide a more standardised and internationally consistent messaging framework for international RMB payments. Such a framework is a key step to increasing use of the currency and is expected to reduce transaction costs, reduce message rejections and cut down processing times which will greatly assist in growing RMB payment volumes.

To some extent, the USD enjoys its global status as it is the currency to price and settle transactions in international commodity markets, such as gold, oil, base metals and agricultural products. For the RMB to internationalise, such engagements are critical. The launch of the international board by the Shanghai Gold Exchange in the SFTZ and three metal futures by Hong Kong exchanges in 2014 were just the first step. While the short-term outlook of the RMB-denominated global commodity market may not be favourable to transaction volumes, relevant institutions will still devote their efforts to enrich the product suite.

Is the RMB already an international currency?

The RMB is heavily used in cross-border trade settlements with approximately 25% of China’s cross-border trade settling in RMB during 2014. A similar trend has been observed in early 2015. RMB-denominated financial instruments are already available for individual and institutional investors in the international market. Spot, forward and other financial derivatives are actively traded in global financial centres with volumes expected to grow significantly in the future (see Figure 1 below). By these metrics alone, the RMB should already be considered an international currency. 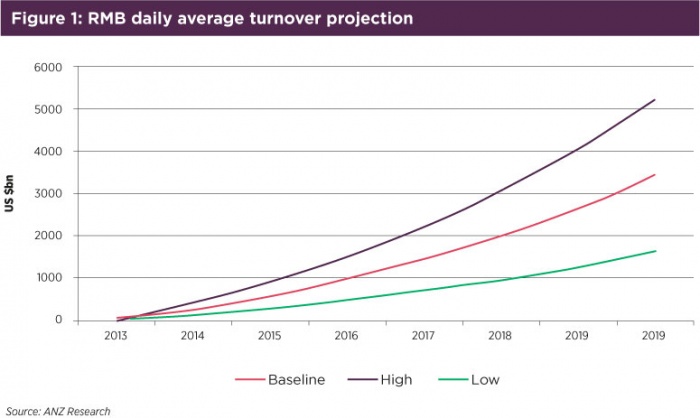 The Chinese authorities have also set up the core financial infrastructure to supply RMB liquidity in offshore markets, with seven new RMB clearing banks established outside of China in 2014 alone and three more confirmed since the beginning of 2015 (see Figure 2).

The People’s Bank of China (PBoC) has also been very active since 2008 in signing Bilateral Swap Agreements (BSA) with the central banks of 28 nations with an aggregate value in excess of RMB3trn (as at December 2014). These BSAs act as a means of supporting growing cross-border RMB investment and trade and to ensure adequate offshore RMB liquidity is available given the current lack of full convertibility of the currency. Offshore deposits will likely continue to grow exponentially thanks to the establishment of these clearing banks in Asia and Europe and further internationalisation of the RMB. Total offshore deposits reached RMB1.9 trillion at the end of 2014, with Taiwan, Singapore, Korea and Macau catching up with Hong Kong as deposit centres. Europe also saw significant deposits with RMB20.5bn recorded in Luxembourg and RMB5bn in London.

When will RMB become a reserve currency?

To some extent, the RMB is already a reserve currency, although it has yet to become a major one. The RMB is included in the investment portfolios of central banks and sovereign wealth funds in Australia and Nigeria for example. In July 2014, the Reserve Bank of Australia (RBA) indicated that it had invested 3% of net foreign reserves in RMB. Nigeria’s central bank reportedly planned to increase its RMB holding from 2% of its reserves to 7%. The European Central Bank is also considering adding RMB to its portfolio. Korea and Taiwan are thought to have invested in RMB as well.

A key development in terms of reserve currency status for RMB will be whether the International Monetary Fund (IMF) decides to include the RMB in its Special Drawing Rights (SDR) later in 2015. The SDR is a virtual currency made up of a basket of currencies which currently comprise USD, EUR, GBP and JPY. Why is this important for RMB? Including RMB in the SDR would likely result in a significant uplift in RMB use and circulation. In particular, central banks would automatically become holders of RMB through their SDR assets while inclusion in the SDR would further legitimise the role of RMB as a global reserve currency and its appeal as a currency for investment by a broader investor community. There would be a boost in demand for RMB from institutions with SDR denominated balance sheets, central banks needing to rebalance reserves and investors seeking exposure to a new global currency standard. 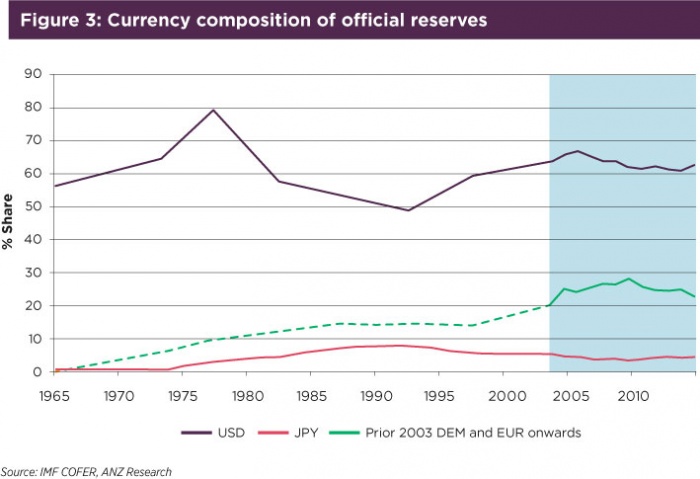 The political will of the Chinese authorities to ensure the RMB’s inclusion in the SDR is clear. The rapid acceleration of capital account liberalisation in China is allowing the RMB to become more “freely usable” which is a key criteria for inclusion in the SDR and many of these changes are occurring with the SDR inclusion in mind. With the increasing use of RMB in cross-border transactions and the PBoC’s signing of swap agreements with other central banks, it is just a matter of time for the RMB to be included in the SDR. The SDR process has the RMB on the cusp of greater global recognition and acceptance and flows of RMB for hedging and investment could see a significant uplift should this milestone be achieved later in 2015.

When will the RMB become an anchor currency?

As China heads towards becoming the world’s largest economy, its currency will naturally and reasonably become an anchor currency. Central banks around the world will formulate their monetary policies and link their currency value explicitly to the RMB. In recent years, many countries have shifted from their USD target to other arrangements and the rise of the RMB will certainly catch their attention when they reform their exchange rate arrangements. While we think it is premature to expect that major central banks in the advanced economies (including Hong Kong) will fix their currencies to match the RMB in the near term, the RMB will certainly feature more heavily in major currency baskets. 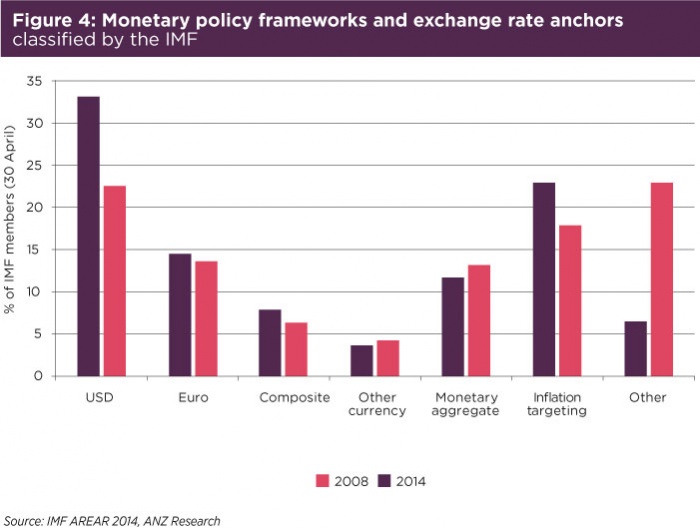