The European high-yield market has grown very strongly in recent years, with record issuance of $107bn from our speculative-grade rated companies in 2013. We believe that it would take a major market setback for this not to be exceeded in 2014, with Figure 1 showing H1 2014 issuance of $88bn running well ahead of $65bn in H1 2013. With LTM issuance running at about $130bn, full year issuance at this level would imply approximately 20% growth from 2013.

The pace of issuance in 2014 is even more notable given the absence of Turkey and the CIS from the markets. Issuance from these regions was over $8bn in 2013, but fell to essentially zero from mid-2013 with the advent of tapering by the US Fed (followed by regional political turmoil). The high-yield markets have isolated these and other emerging market woes, and focused rather on the combination of improving European credit fundamentals (with low default rate), and the search for yield – although this thesis is being tested given the recent escalation in geopolitical risks. The strong growth of the high-yield market in 2014 has also occurred in the face of renewed competition from the leveraged loan market.

The strong growth of the European high-yield market over the past three years has been driven primarily by the refinancing of (previously unrated) bank/CLO-funded LBOs in the capital markets. The capital structure for those companies was initially put in place in the 2005-2007 LBO boom. Figure 2 shows that this structural transformation has slowed down as it nears completion.

Despite the reduced flow now coming from this structural market change, we rated 37 new bond issuers in H1 2014, which was more than the 33 new issuers in the same period of 2013 (and compared to 65 for the whole of 2013). Despite the greater number of new issuers, Figure 3 shows that the $24bn coming from new issuers in H1 2014 was 27% of total high-yield issuance volume, a lower percentage than the 34% ($36bn issuance) for the whole of 2013. This is mainly because there has been a high level of repeat issuance, in large part as companies with outstanding bonds have been refinancing them to benefit from the current ultra-low rates environment.

Average new-issuer bond size also fell to $502m from $559m in 2013, excluding the distortion created by the record-breaking volumes issued for the Altice/Numericable acquisition of the French mobile telco SFR. We have also seen a recent trend for smaller companies to tap the high-yield market. However, this has recently taken a pause, with only 12% of new-issuer bonds in the first half of 2014 being from companies with Moody’s-adjusted Ebitda below $100m, compared with 17% in 2013.

Wide range of companies, including many LBOs, taking advantage of active high-yield markets

Given the above trends, Figure 4 shows that the European speculative-grade rated universe is now dominated by LBOs, which are predominantly rated in the B category. There is also a significant fallen angel component at Ba1, mostly positioned just below investment grade. Figure 5 shows that the largest European markets are the UK, Germany and France. 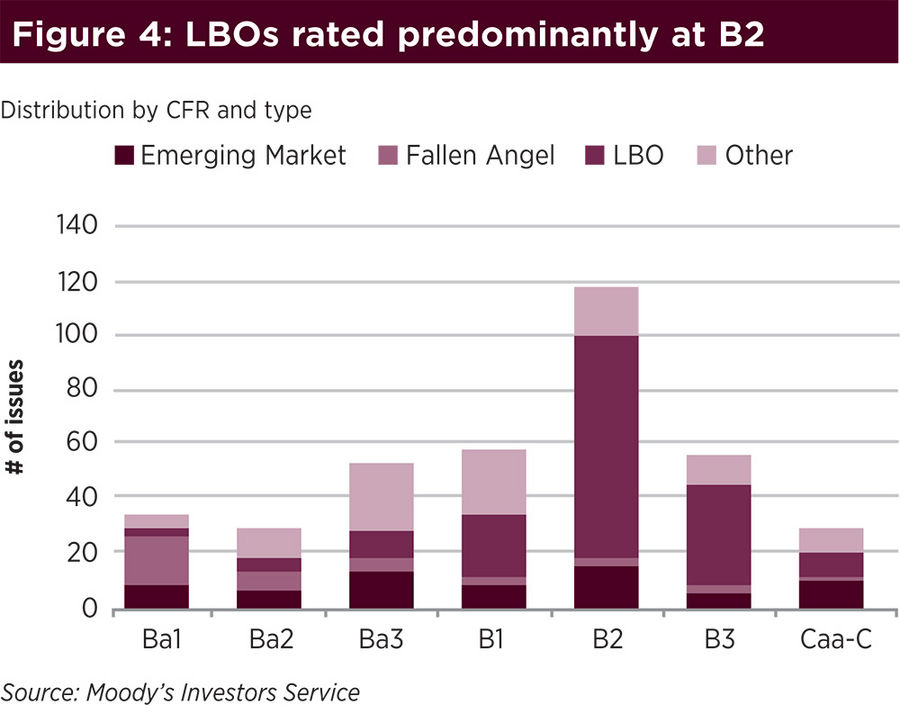 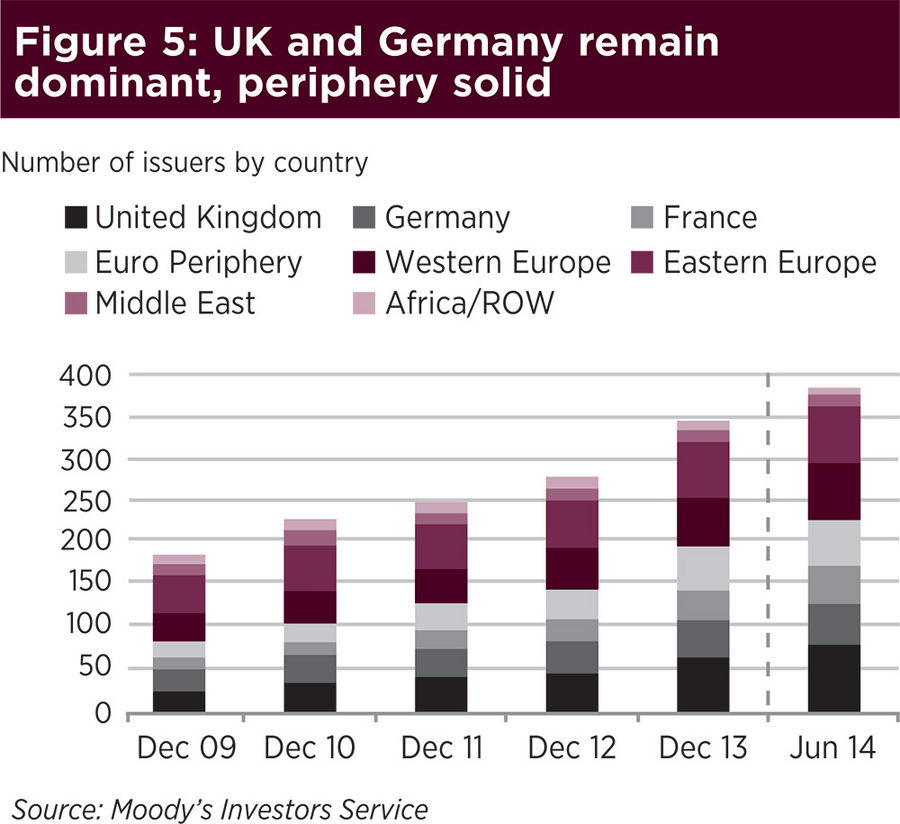 Issuance has also been supported by the return of confidence in the euro area periphery. Figure 6 shows that high-yield issuance of $26bn from the euro area periphery in H1 2014 (comprising 30% of all EMEA issuance) has already surpassed the full year 2013 figure of $24bn (22% of all EMEA issuance), with the pace stepping up in Q2 2014 (largely owing to the series of bonds issued by Wind).

M&A activity has also contributed to the higher volumes – most notably the Altice acquisition of SFR, reportedly the largest ever LBO – although refinancing remains the primary use of bond proceeds.

Figure 7 shows the evolution in issuance by industry. The European high-yield market remains dominated by the telco and auto sectors. The telco sector in particular has recently been boosted through the jumbo issuance from Altice and the new fallen-angel status of Telecom Italia. With the euro area moving out of recession, we are seeing growth and increasing interest in cyclical sectors such as building materials, packaging and chemicals. However, we do not anticipate any significant near-term changes to the overall industry composition, which may continue to make diversification difficult to achieve. 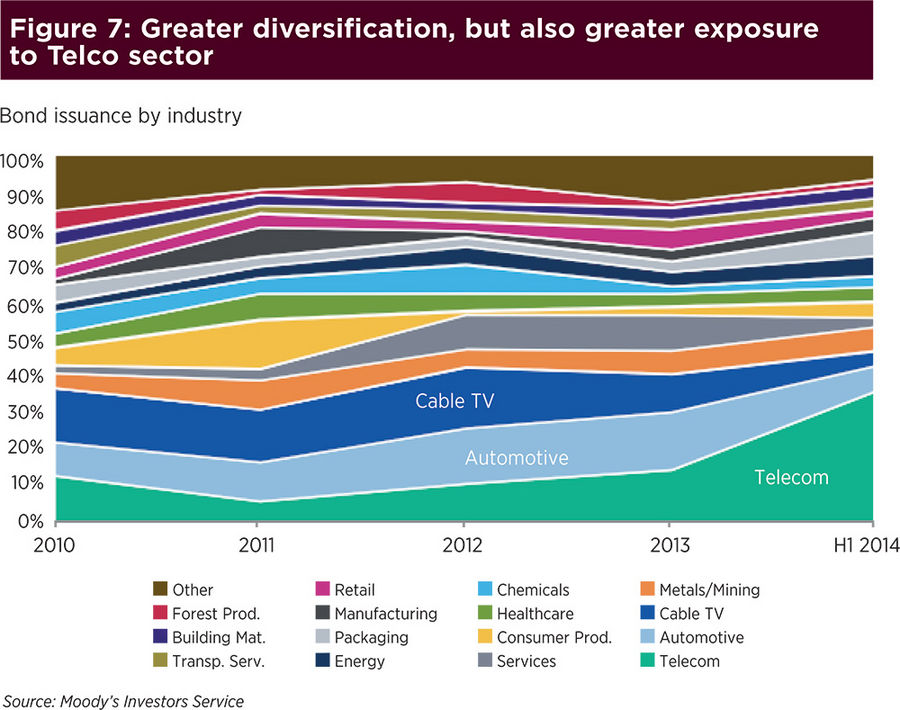 The very high level of issuance has been underpinned by an overall benign European credit environment, as the continent starts to recover from the financial crisis. Although overall economic growth remains generally subdued, Figures 8 and 9 show the ongoing improvement in credit quality of the rated universe. Excluding five rating downgrades in April that were directly linked to the downgrade of Ukraine, there were five times as many upgrades (20) as downgrades (4) in Q2 2014. Our high-yield rating outlooks – reflecting the likely direction of future ratings migration – have also become increasingly stable. The percentage of companies with negative outlooks or under review for downgrade has fallen progressively to 17%, from a recent high of 29% at the end of Q1 2013. 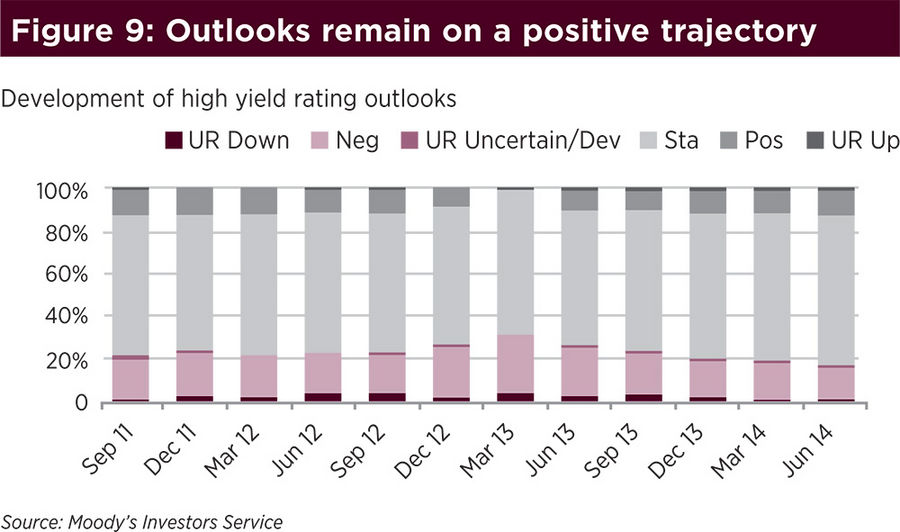 Figure 10 shows that liquidity profiles for EMEA speculative-grade rated companies are also in aggregate currently better than ever. Despite higher leverage, cash flows are benefiting from lower interest outflows given the very low interest rate environment. Debt maturity profiles also continue to improve through a steady flow of refinancings. 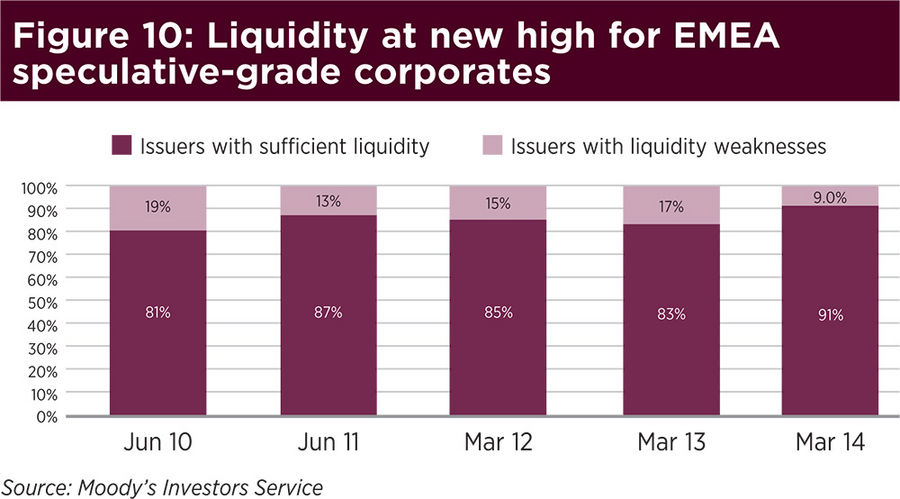 The few cases of liquidity weakness we observe in European corporates are concentrated in those companies that we rate at B3 negative and lower. We do not expect these weaknesses to result in a near-term spike in the default rate, which Figure 11 shows has remained below 3% for over three years. In a benign macro and market environment, with interest rates staying at historically low levels and solid liquidity profiles, it is difficult to forecast the precise trigger, let alone the timing, for the next default rate spike. 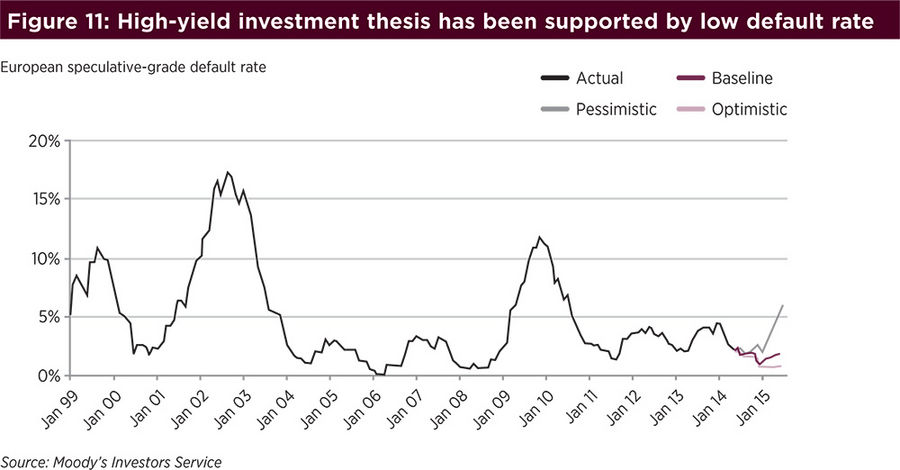 However, our list of companies rated B3 negative and lower is likely to provide a large percentage of future defaulters. Reflecting the improving credit environment, the percentage of our speculative-grade companies rated B3 negative and lower fell to 8.6% from 10.8% during H1 2014. The 33 names still in this list include companies negatively affected by sovereign considerations (notably Ukraine); those that continue to exhibit potentially unsustainable capital structures, or face idiosyncratic operational issues; and a small number where debt has been used to fund equity-like risk.

Notwithstanding the positive credit trends described above for the overall speculative-grade rated universe, issuer credit quality continued to fall. This is illustrated by the fact that only 31% of bonds in H1 2014 were issued by Ba-rated companies, a smaller percentage than the 39% in 2013. For new issuers, the B2 corporate family rating (CFR) remains the sweet spot in current market conditions to optimise leverage, pricing and credit quality – and accounted for about half of all new issuers in the first half of 2014. The percentage of bonds rated in the Caa category also rose to 14% in H1 2014 from 11% in 2013. In the same vein, the percentage of bonds rated at least two notches below the CFR rose from 17% in 2013 to 22% in H1 2014 (and to 25% in Q2 2014), reflecting an increase in subordinated and/or PIK issuance. Figure 12 shows this recent widening of notching, with the debt cushion provided by the subordinated issuance resulting in commensurate positive ratings uplift on senior secured debt. 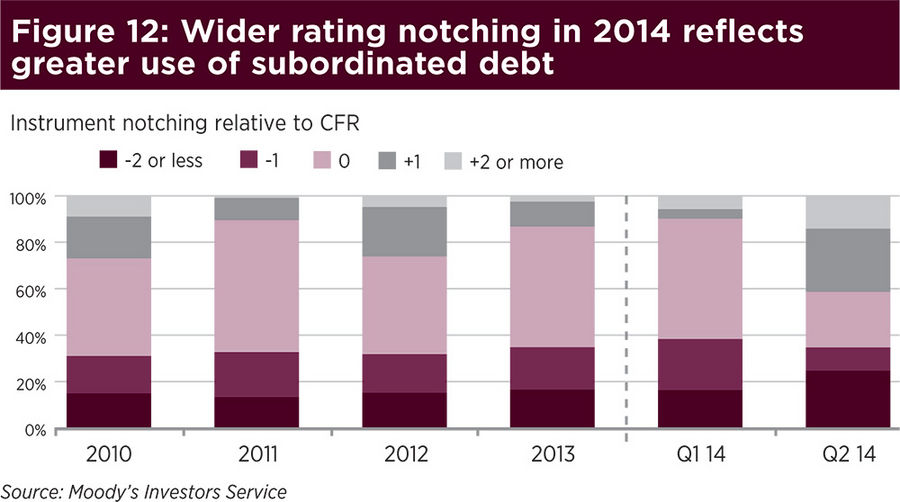 Other signs of deteriorating credit quality include the slide in high-yield bond covenant quality, per Figure 13. Portability has become a standard feature in bonds from sponsor-owned firms (and has now also migrated across to loans), and it has already been exercised in the case of Travelex. 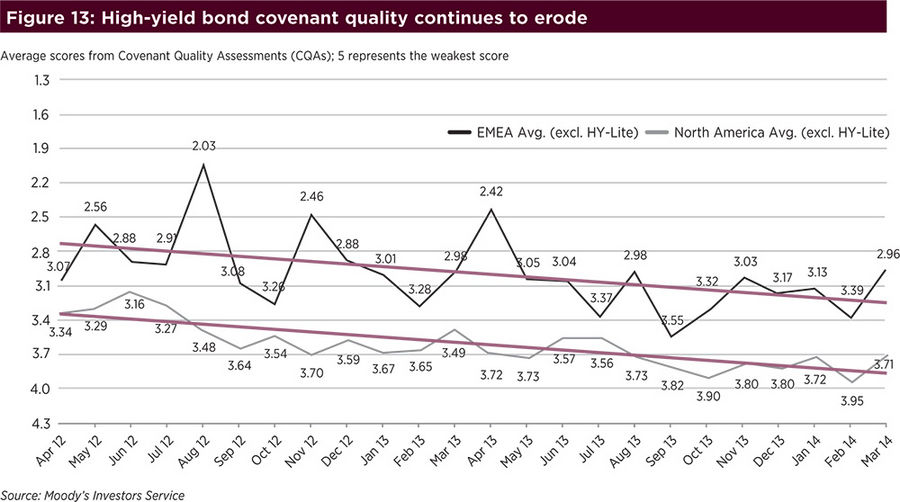