The day count convention determines how interest accrues over time in a variety of transactions, including bonds, swaps, bills and loans.

In wholesale markets, interest is usually expressed to accrue at a rate per annum (the reference period).

It is often due and payable at shorter intervals, usually a number of months (the interest period).

The day count (or 'daycount') convention regulates how the parties are to calculate the amount of interest payable at the end of each interest or other period.

It is commonly expressed as a fraction.

The numerator will be the convention for the number of days in the period - usually actual or a notional 30.

The denominator is the convention for the number of days in the reference period - often 360 or 365.

Conventions vary depending on the market type, location and the currency in question.

Commonly used day count conventions are considered below, but first it is important to bear in mind the various business day conventions that may apply. These regulate the start and end date of each period.

Cycle dates are not adjusted for weekends or holidays and are forced to land within a cycle month.

Dates are adjusted for weekends and holidays to the next good business day.

Dates are adjusted for weekends and holidays to the previous good business day.

End of month – no adjustment

Dates are adjusted to land on last day of the month.

Dates are adjusted to the last day of the month but if that day is a weekend or holiday, then it is adjusted backward to the previous good business day.

Two business days prior to third Wednesday of month

Dates generated are two business days prior to the third Wednesday of the month (used in conjunction with Eurodollar futures).

This basis is commonly used for Eurocurrency rates, except sterling.

The day count fraction is defined as the actual number of days in the period over 360.

This basis is commonly used for sterling interest rates.

The day count fraction is defined as the actual number of days in the period over 365.

It is also used for money markets in Australia, Canada and New Zealand.

This basis is sometimes confused with actual/365, which is defined next.

This basis is commonly used for all sterling bonds, Euro denominated bonds, US Treasury bonds and for some USD interest rate swaps.

30E/360 is used for calculating accrued interest on some legacy currency pre Euro Eurobonds and on bonds in Sweden and Switzerland.

The day count fraction is defined as the number of days in the period (Δ360) over where (Δ360) is calculated as if every month had 30 days, as described in Figure 1. 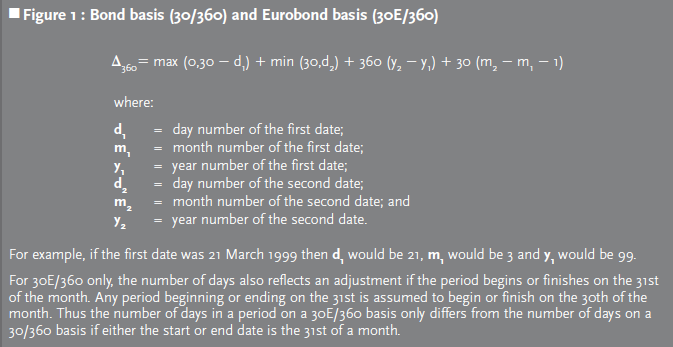 Each month is assumed to have 30 days, with an exception that if the last day is the 31st and the first day is not 30th or 31st then that month has 31 days.

Simple interest does not offer the opportunity to earn interest on interest, ie, there is no compounding of interest.

Simple interest is typically used for instruments with a maturity of less than one year.

Offers the opportunity for interest payments to be reinvested in order to earn interest on interest. Compound interest is typically used for instruments greater than one year.

The settlement day is the day on which traded bonds or securities actually change ownership and are paid for. This is often a few business days after the transaction date, T. Interest rate calculations normally start on the settlement day.

Settlement in Euro denominated bonds and in most markets is on T+3, although for US and UK government bonds and bills it is T+1, and for sterling bonds it is T+5.