The European high-yield market has grown very strongly in recent years, with record issuance of $121bn from our speculative-grade rated companies in 2014, as shown in Figure 1 below. We believe that issuance volumes will remain stable throughout 2015, although market liquidity is less predictable than it was in 2013 and the first half of 2014, when investors’ search for yield coupled with improving macroeconomic forecasts in Europe led to a strong technical backdrop, with significant capital inflows and tightening of credit spreads. 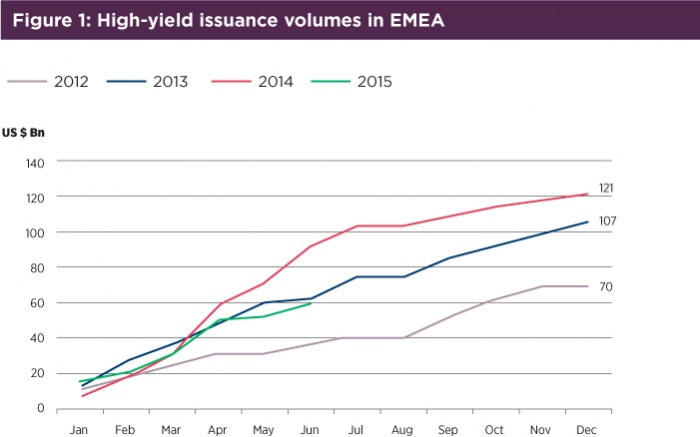 In the last 12 months, the market faced a number of woes, including, but not limited to, intense negotiations on a bailout plan for Greece, a slowdown in economic growth in China and heightened geopolitical risk which culminated in sanctions to Russia. Nevertheless, the market has remained open to repeat, well-known issuers and constructive towards a select number of first-time issuers with strong credit fundamentals. However, the leveraged loan market has demonstrated greater stability than the high-yield bond market at times of stress and volatility. As shown in Figure 2, bond volumes have been lower than that of loans in the second part of 2014, as well as in May and June of 2015. 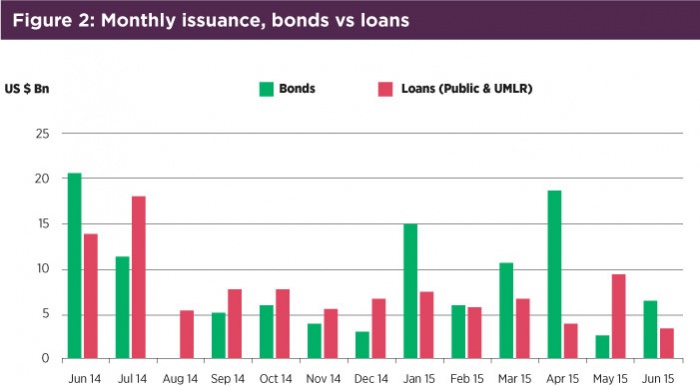 Volumes of rated high-yield bonds reached $121bn as of year-end 2014; this was a record year for the high-yield market in Europe, supported by improving macro-economic conditions and renewed interest from investors. The size of the high-yield bond market has effectively doubled since 2010, fuelled by the refinancing of previously unrated bank or CLO-funded leveraged buyouts (LBOs) in the capital markets. The capital structure for those companies was initially put in place in the 2005 to 2007 LBO boom. However, Figure 3 shows that this structural transformation has slowed down as it nears completion. 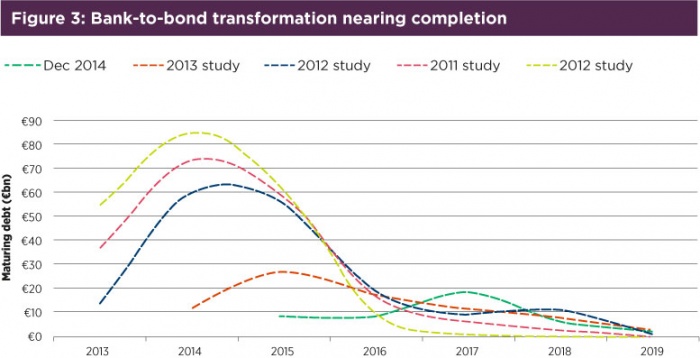 Despite this trend, Figure 4 shows a growing number of rated first-time, high-yield issuers in Europe, the Middle East and Africa that accounted for 25% of volumes in 2014, supporting our view that small- and medium-sized companies continue to transition from traditional bank-to-bond financing. However, for the high-yield market to grow this year and beyond it would require a steady volume of M&A (mergers and acquisitions)-driven issuance and primary leveraged buyouts, because the stock of debt to be refinanced has reduced compared to previous years. 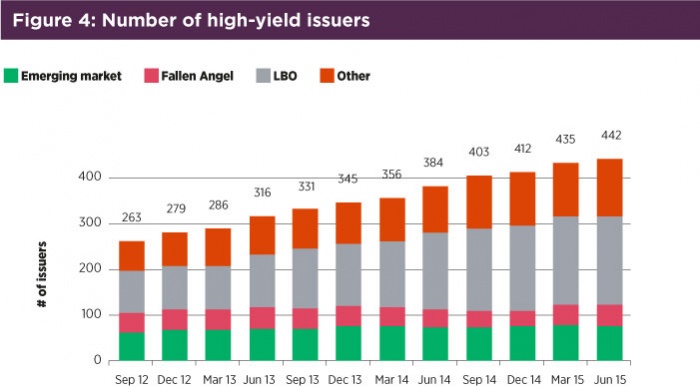 We expected stable issuance volumes in 2015 because of:

At the same time, the liquidity of the high-yield market is likely to be more volatile because of a growing number of negative catalysts. In January and February 2015, the market paused, waiting for details of the Quantitative Easing (QE) programme by the European Central Bank. In May, the market took another breath in light of the elections in the UK and the intensifying debate around a potential ‘Brexit’ and, most recently, in July the high-yield bond market completely shut for two weeks amid concerns around the resolution of the Greek financial crisis.

As a result, in the first half of 2015 the volatility of credit spreads kept new issuers on the sideline which, coupled with a lack of supply from private equity sponsored LBO deals, has caused a 36% decline in high-yield bond volumes to $59bn as shown in Figure 5. There were only 13 new issuers in the first half of the 2015 compared to 36 in the same period of 2014. The market has been dominated by repeat issuers, especially those rated in the Ba category, that have refinanced outstanding bonds at lower coupons.

Despite this slowdown, issuance remained well ahead of the second half of 2014 ($59bn in H1 2015 vs $29bn in H2 2014; see Figure 5 below). High-yield bond issuance dropped significantly from August onwards in 2014 on the back of a multitude of reasons, including a phasing effect with a large supply glut in July ahead of the summer break, increasing geopolitical tensions with the introduction of sanctions against Russia, the sudden default of Phones4U in September 2014 and the resurfacing of Eurozone uncertainties with the elections in Greece. While concerns over Greece and the slowdown in China will continue to influence the debt capital markets, the issuance profile for 2015 could be more balanced, resulting in bond volumes for the full year still approaching last year’s levels.

The first half of 2015 nevertheless illustrated that despite external shocks, high-yield bonds will remain a prominent financing tool as long as interest rates stay low and investors remain willing to deploy funds in the asset class in their search for yield. However, we expect market access to remain more difficult for first-time issuers and small, less well-known names with weaker ratings. We see investors making greater distinction between companies with a strong credit story, which will continue to receive generous funding terms, and less-favoured credits, which will find financing conditions to be more difficult than they were earlier in 2014. Additionally, growing concerns around the limited depth of the secondary market is likely to set a floor at around €200-€250m to the minimum bond size required to attract investors’ interest.

Improving diversification, but some sector and geographical concentration persists

Germany, the UK and France are the top three countries by volumes of high-yield bonds issued in EMEA and represented 61% of the total as of the twelve months to June 2015. While a growing number of small and medium-sized issuers from Italy (representing 11% of the market) and Spain (4%) have sought ratings and tapped the bond market in 2013 and 2014, this trend slowed in the first part of 2015, owing to improving lending conditions from banks. Increasing liquidity has been made available to local banks (that have historically held a strong foothold in their markets prior to the financial crisis in 2009) through the ECB’s Targeted Long-Term Refinancing Operations (TLTRO) and QE aimed at fuelling corporate investments in support of GDP growth and employment. 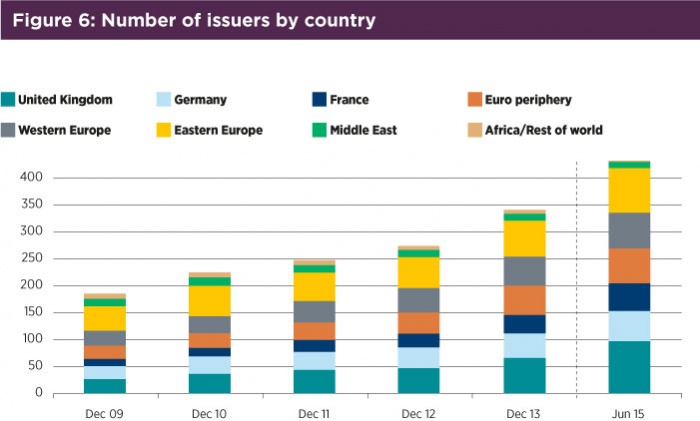 However, the transition from traditional bank financing to bond financing will continue in Europe because of the growing maturity of the bond market, attractive coupons and less restrictive covenants in the bond indentures as well as the banks’ on-going need to reduce credit exposure to non financial institutions, especially those with a higher risk of default. As previously shown in Figure 4, the number of issuers has increased from less than 250 in 2010 to around 450 in 2014, providing greater diversification and investment opportunities.

The European high-yield market is dominated by the automotive and telecom industries representing 19% and 16% respectively of volumes in the 12 months to June 2015. Concentration in the auto industry reflects the size of the balance sheets of European car manufacturers such as Fiat Chrysler Auto, Renault SA and Peugeot SA, which are currently rated in the Ba and B rating categories. Issuance volumes in the telecom sector have also been boosted by some M&A driven jumbo deals such as the one related to the acquisition of Portugal Telecom by Altice at the beginning of the year, as well as the speculative grade rating of some repeat issuers such as Telecom Italia and Wind in Italy.

Although better macro prospects could bring issuers from more cyclical sectors to the market, near term changes to the overall industry composition are unlikely which may continue to make diversification of investment vehicles difficult to achieve.

The average corporate credit rating of high-yield issuers has stabilised just below B1 in 2015. Thirty-five upgrades visibly exceeded 23 downgrades in the first half of the year, pointing to improving credit quality (excluding the negative rating actions on Russian issuers driven by the downward revision of the sovereign rating to Ba1). Following the tremendous growth in high-yield markets over the last three years, the B rating category is now more than twice as big as it was in 2011. Around 80% of the B2 universe has been newly rated since 2011. 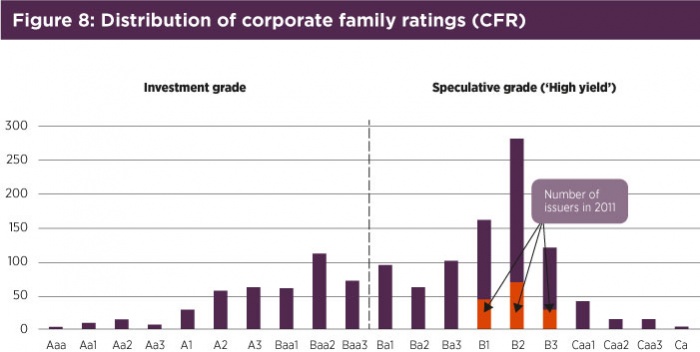 Our forecasting model predicts low default rates over the next twelve months. We expect the global speculative-grade default rate to end this year at 2.6%, below the historical average of 4.7% since 1983. In Europe, we recorded a 2.0% default rate of speculative grade issuers in the second quarter of 2015 and we expect it to be around 1.7% at the end of 2015, as shown in Figure 9.

The continuation of this benign default rate outlook is supported by robust liquidity. The near-term refinancing risk faced by rated EMEA speculative-grade companies has reduced compared with previous years following record levels of refinancing. This is shown in Figure 9 by the downward trajectory of our Liquidity Stress Index representing the percentage of speculative-grade companies with the weakest liquidity profiles. The debt maturity wall has been pushed to 2019 and beyond (see Figure 10), with 69% of debt coming due in 2016 concentrated in Ba rated companies, which we expect to access the bond market even at times of market stress. In a benign macro and market environment, with interest rates staying at historically low levels and solid liquidity profiles, it is difficult to forecast the precise trigger, let alone the timing, for the next default rate spike. However, the recent increase of new small-scale issuers with weak business models rated in the B2/B3 category may include companies more vulnerable to event risk and isolated defaults are likely to occur. 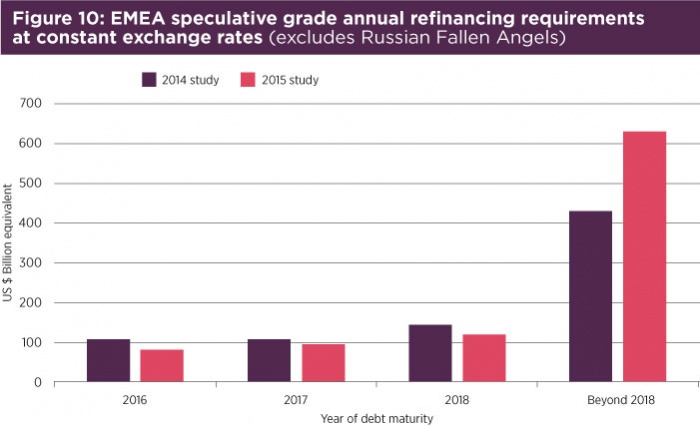 Covenant protections are not expected to improve materially

The covenant quality scores assigned to EMEA’s rated high-yield bonds have deteriorated since 2011 before stabilising in the second quarter of 2015. Figure 11 shows that the overall covenant quality remains in the 'weak' risk category and we do not expect any material improvement in the covenant quality in the immediate future. Some of the trends affecting the covenant scores include the shortening of non-call periods, greater ability to incur additional debt and to make restricted payments, as well as the most recent inclusion in sponsor lead deals of portability clauses, which effectively remove a mandatory debt repayment triggered by a change of control. 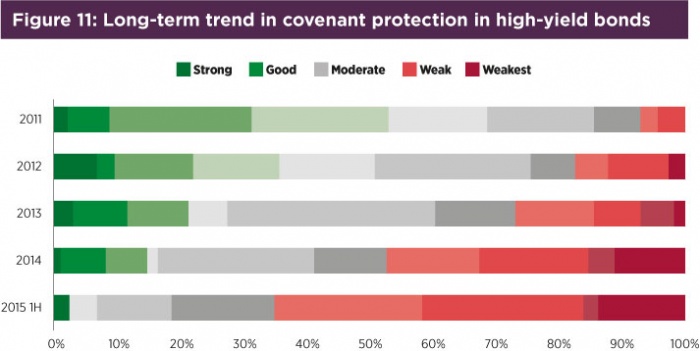